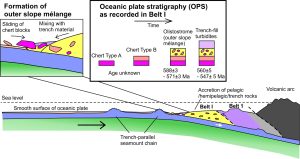 Cherts and carbonates represent outstanding and widespread members of Ocean Plate Stratigraphy (OPS) from the Archean to present. Their composition reflects different conditions during their deposition, which can be potentially linked to the contrasting and temporally changing processes that occurred on moving oceanic plates. Additionally, they also provide unique insights into the compositional variations in seawater chemistry and temperature as well as redox conditions of their depositional environment. We will pursue a multi-technique study combining tectonic, structural, and stratigraphic observations with elemental and isotopic (Hf– Nd–Mo–Si–C–O) data to reveal the origin and nature of chert and carbonate successions in ancient OPS sections and test whether they can be used as geochemical proxies for the variable processes occurring on oceanic plates. The project will also contribute to our understanding of paleoenvironmental conditions during the late Proterozoic–Cambrian with implications for global events preceding and synchronous with the Great Cambrian Explosion of life. [2020–2022, funded by grant of the Czech Science Foundation No. 20-13644S to Lukáš Ackermann]

A multidisciplinary project focused on petrogenesis, emplacement, and tectonic setting of Late Archean granites in the Bienville province, northeastern Canada. The main tasks include examining fabric and architecture of granitic plutons, numerical modelling of associated crustal strains, determining high-precision radiometric age using laser ablation ICP-MS and ID-TIMS and geochemical composition including trace elements and Rb–Sr, Sm–Nd, and Hf isotopes. The obtained data will be used to interpret thermal and mechanical conditions in the host rock during emplacement, durations, tempos, and spatial and temporal patterns of plutonism. These interpretations will then serve as a basis for a general discussion and testing the hypothesis whether the Late Archean granites record plume-dominated vertical tectonics or whether they record modern-style motions of lithospheric plates. [2019–2021, funded by grant of the Czech Science Foundation No. 19-08066S to Jiří Žák] 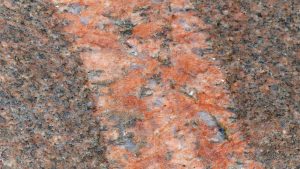 The project is aimed at examining the complex relationships between emplacement of regional dike swarms andhydrothermal, ore-bearing fluid flow during collisional orogeny. This issue is still poorly understood and will be addressed using the Variscan Central Bohemian Dike Swarm as an excellent case example. The key research objectives, which will be addressed through
a combination of detailed field studies with modern analytical methods including rock magnetism and geochronology, are (1) analysis of spatial and geometric relations between dikes and hydrothermal veins or stockworks across multiple spatial scales; (2) establishing relative temporal relations between dikes and veins, but also to joints and brittle faults; (3) defining the magma flow directions and source (chamber) locations from the internal magmatic fabric in dikes on a single-dike and then on a dike-swarm scale; (4) attempting to retrieve fluid flow pathways, directions, and source regions from magnetic minerals within veins; and, finally, (5) formulating a genetic model of dike emplacement into the actively stretching upper crust in relation to localized hydrothermal fluid flow during collisional orogeny and sheding new light on the geodynamic causes for the formation of syn-
orogenic dike swarms and ore deposits. [2021–2023, funded by grant of Charles University Grant Agency project No. 304721 to Jonah Jonathan] 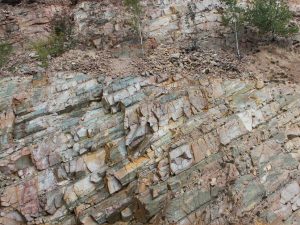 The project focuses on application of three magnetic methods (in-phase and out-of-phase anisotropy of magnetic susceptibility and anisotropy of anhysteretic remanent magnetization) on the origin and evolution of extinct collapse calderas. On the case example of late Paleozoic Tharandt Forest caldera (NW Bohemian Massif) we will examine behavior of magnetic petrofabrics, and develop a conceptual model of emplacement of underlying magma chamber, eruptible melt extraction and emplacement dynamics of ring dikes as feeders for ignimbrite eruptions. Moreover, we will focus on relation between magma flow processes, direction and deposition of ignimbrites and caldera geometry to nearby Elbe fault zone. This strategy will lead us to a general synthesis of dependence of regional tectonic deformation, fault displacement and caldera evolution. Finally, this proposal is designed to introduce a new AARM methodology in the Laboratory of Rock Magnetism at the Faculty of Science, Charles University. [2020–2022, Charles University Grant Agency project No. 124320 to Irena Olšanská]

The role of tectonic inheritance in continental rifting and basin inversion

The project will examine the interaction between tectonics and sedimentation during continental extension (rifting) and transition from active- to passive-margin settings. An important goal is also to examine the role of tectonic inheritance in rifting and subsequent basin inversion/orogeny. These issues will be addressed in the Lower Paleozoic Příbram–Jince and Prague basins, Bohemian Massif, a great examples of the initial stage of rifting and peak-rift and associated magmatism, both variably inverted during the Variscan. Using a combination of field and analytical methods (including sedimentology, rock magnetism, and geochronology), the research objectives in these basins are (1) distinction of rift-related structures from pre- and post-rift structures; (2) investigation the effect of pre-existing heterogeneities on thickness variations, depocenters, facies distribution, provenance, and paleo-current directions; and (3) interpretation of depositional settings and syn-rift magmatism. Based on the integration of these objectives, tectonosedimentary development of both basins will be interpreted and a general model exploring the role of tectonic inheritance in rift initiation and subsequent orogeny will be formulated. [2020–2022, Charles University Grant Agency project No. 952220 to Reza Syahputra]

Caldera volcanism of the European Variscan belt: insights from structure and rock-magnetism 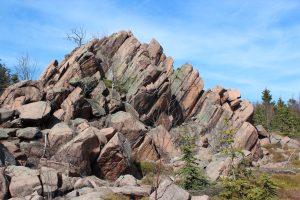 This project focuses on collapse calderas and their eruptive products in different geotectonic environments of the European Variscan orogenic belt, which closely follows up the diploma thesis of the principal investigator. On the example of the Permocarboniferous Gréixer rhyolite complex located in the Catalan Pyrenees, a geologic field mapping, structural and rock-magnetic survey of lavas and pyroclastic deposits will be conducted. A detailed analysis of magnetic petrofabrics using the anisotropy of magnetic susceptibility (AMS) and anisotropy of anhysteretic remanent magnetization (AARM) complemented by a quantification of the magnetic mineralogy will allow identification of caldera source of the felsic volcanism in the Permocarboniferous Castellar de N´Hug sedimentary basin. The field works in Catalonia will be performed along with Spanish colleagues from the Consejo Superior de Investigaciones Científicas (CSIC) in Barcelona. We believe that such cooperation will lead to formation of a synthetic model of zonality in the composition, absolute age and geochemical composition of volcanic rocks within the European Variscides, which could reflect different geodynamic causes of volcanism in different parts of the European Variscides. [2021–2023, Charles University Grant Agency project No. 354821 to Petr Vitouš]

2017–2019 Black shale formations as geochemical markers of paleoenvironmental changes and tectonic setting along active continental margins (funded by grant of the Czech Science Foundation No. 17-15700S to Lukáš Ackermann)

2016–2018 Sedimentary record and mechanics of collapse of orogenic belts (funded by grant of the Czech Science Foundation No. 16-11500S to Jiří Žák)

2014–2016 Dynamics of Precambrian accretionary wedges and mélanges (funded by grant of the Czech Science Foundation No. P210/14/10589P to Jaroslava Hajná)